After going one whole year without eating pork, I was ready for some ribs. While on the whole “no pork” thing, I had just the place in mind I’d like to get ribs from if I ever started back eating pork. That place was Fat Matt’s Rib Shack on Piedmont Avenue here in Atlanta. I had passed by the highly recommended rib joint numerous times and would always see it packed with customers. Sometimes the line would even wrap around the small building. So I just knew it had to be delicious. Was it? Yes? No? Keep reading!

One morning around 11:45am, I decided that I would do lunch early since I had no breakfast and was feeling as if I hadn’t ate in days. I was close to Fat Matt’s and decided to stop in. The atmosphere was nice. Workers behind the counter greeted me with small, but nice smiles. Being the music lover that I am, the sounds of Aretha Franklin coming from the speakers were greatly appreciated. I took a while to look at the menu. Mostly to pick a side or two. I already knew I wanted ribs of course.I went with a half slab of ribs and a side of potato salad. The wait was not long at all.

Moment of truth. First I tried the potato salad, trying to stretch out the excitement of the ribs. The potato salad didn’t do it for me. It wasn’t what I was expecting for a popular southern spot.

The RIBS.. The ribs were okay. Yeah, just okay. Sorry if you’re disappointed. I was too. They were tender and fell off the bone. That was the good thing about them. What I didn’t like was that I couldn’t tell if they were grilled or baked. They dis not have that real grill flavor. I also didn’t like the sauce. I actually think I would have enjoyed the ribs better without the sauce.

Usually when restaurants are so popular, you expect above average tasting food. But hey, McDonald’s is popular and they never won a burger tasting contest.

For me, Fat Matt’s Rib Shack was just OKAY. 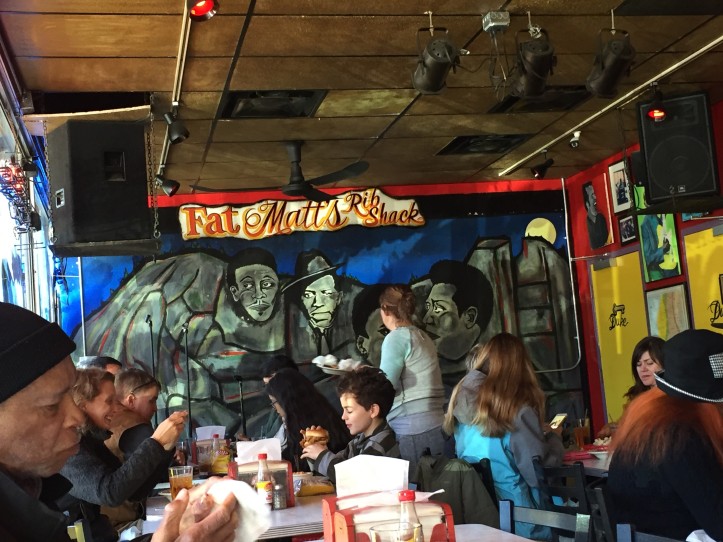